Part three in this text miniseries provides patterns for a five-stripe lower-case “aro” and two five-stripe letter “A” patches, one with a matching flag-stripe frame. All three patterns use traditional cross stitch techniques without quarter stitches, making them simpler and quicker to sew.

You’ll need familiarity with cross stitch (full crosses) and backstitch to make unedged patches, along with a buttonhole/closed blanket stitch to make the edged patches shown above. The first instalment of this patch tutorial series demonstrates cross and blanket/buttonhole stitch, while the second covers backstitch.

For a complete guide to the stitching process for text patches, please see part one of this miniseries, where I’ve posted step-by-step instructions for stitching text. All patterns in this series can be similarly modified in terms of letter spacing, adding/subtracting quarter stitches and layout.

The lower-case “a” pattern is a square 20 stitches wide and 20 stitches high. Assuming a three stitch border, as for my other patches, this means you’ll want a 23 x 23 block swatch plus any excess (if used unmodified).

The upper-case “A” pattern is a square 20 stitches wide and 19 stitches high. Assuming a three stitch border, as for my other patches, this means you’ll want a 23 x 22 block swatch plus any excess (if used unmodified). 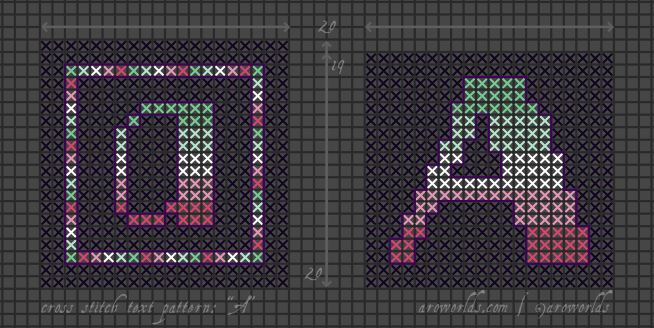 The five-stripe “aro” pattern is a rectangle 32 stitches wide and 14 stitches high. Assuming a three stitch border, as for my other patches, this means you’ll want a 35 x 17 block swatch plus any excess (if used unmodified).

My example “aro” patch (shown above) has been sewn on a swatch 29 stitches wide, with only one block’s width left between the letters (instead of two). If you like text with narrower tracking or want to sew a smaller/quicker patch with fewer stitches, you may prefer this version!

The upper case “A” patch can be adapted to fit any flag with a stripe count into which fifteen can be cleanly divided.

If omitting the frame, one may choose to sew this ten-stripe a-spec flag (one row per colour) instead of a five-stripe flag (two rows per colour). 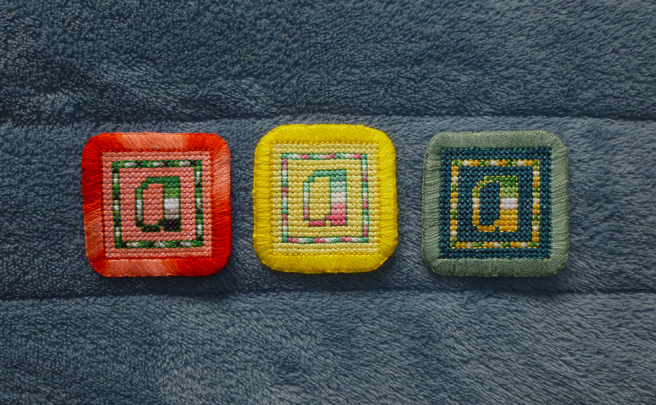 With small changes in the colours of odd stitches or the width of the stripes, the “a” text patterns may also work for arovague, arojump and arospike flags.

With the upper-case “A” and “aro” patch designs, I start by stitching the lettering and continue with the background colour before starting the backstitched outline. This means your backstitching sits neatly above the surrounding stitches and won’t get caught underneath them.

The lower-case “a” patch, surrounded by a square frame, is a little more complicated. I find it best to start by stitching in the “a” and the section of background colour contained within the frame, like so: 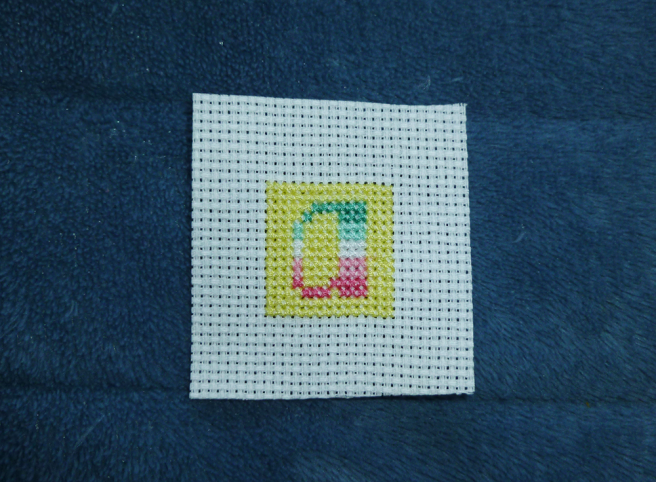 Be careful to ensure that you’ve sewn a square with two rows above and below the “a” and three columns to the left and right of the “a”. This gives you a perfect square for a five-stripe frame that repeats each set of flag stripes three times per side. If you sew your square too large or small, or it isn’t a perfect square, you’ll end up with a half section of flag at one corner instead of an even repeat.

When sewing the striped frame, I find it easiest to complete a whole colour rather than change floss for each new stitch. Take your first colour (the topmost stripe on your letter “a”, a dark teal in my example) and start sewing at the top left-hand corner, working clockwise around your patch. Leave four blank blocks between each full cross stitch, sewing only on the fifth block, until you reach the next corner. Stitch this corner cross and count down another four blank blocks. Repeat this process for all sides of your frame, remembering that all four corners will be sewn in your first/top stripe colour.

After that, fill in the blank blocks with each new colour, placing the new stitch clockwise of the last colour you worked: 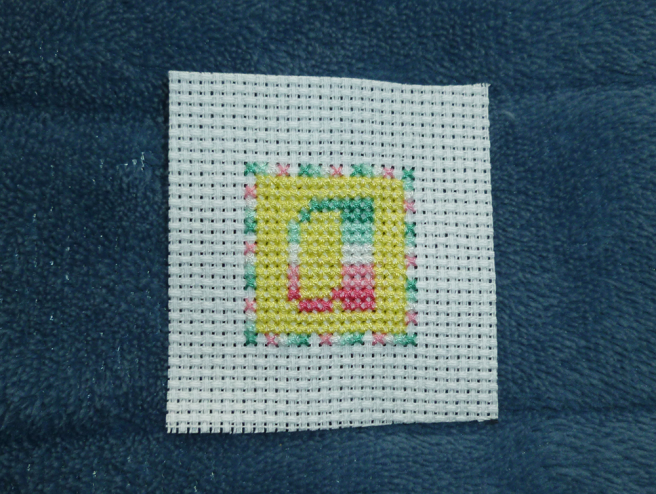 Once I’ve finished my frame, I fill in the rest of the background colour. If you wish a smaller patch, you can omit this step. Add your backstitching if desired (see below) and then leave three blocks’ width of blank aida on each side of the frame’s outside edge when trimming for your patch’s border. 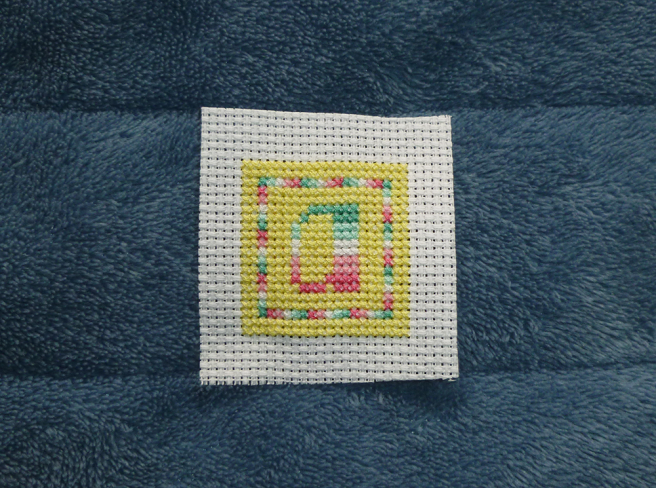 My next step, before trimming and finishing, is backstitch. This is often optional if you’ve chosen a background colour that contrasts well with your flag stripes, but I find it makes the patch easier to read from a distance.

Now trim the aida and buttonhole stitch the edging like so:

And that’s it! If you want quicker or easier ways to edge (or not edge!) your patch, please check out my pride hearts tutorial, where I discuss a variety of sewing and no-sewing options for patch borders and finishing.

I enjoy the aesthetic of lower-case letters (as evidenced by my book covers), so these new designs are perfect for me. I’ve drafted “aroace” and “alloaro” lower-case patterns to test-stitch for future patch tutorials, but I’d also like to create four-stripe variations as well.

Next up, though, is something I’ve been planning for a long time: a denim jacket covered with a year‘s worth of cross stitch pride patches. If you’re wanting a post about arranging and attaching multiple patches onto the one garment, please know that this will be posted later this week!