Since I took an updated patch collection photo for the tutorial master page, I thought I’d post some spoilers for new patch designs.

I wanted to make letter “A” patches, in part because many of my identities start with said letter and in part because it’s still common to see “A” associated only or first with asexual in the parlance of LGBTQIA+ initials. Nor did I want to remake the same style of patch in different colours and stripe variations, so, using a few extant patterns and typefaces as inspiration, I experimented with different upper and lower case “A”s:

The challenge lies in making letters that have sections wide enough to fill in with cross-stitched stripes, which is why it’s taken me so long to attempt anything in lower case!

I have work to do in further developing the arovague and (upper case) aromantic “A”s. The arovague one is just a blob (a grey inkblot, perhaps?) instead of a swish, while the aromantic one looks … well, gappy. The abro and allo-aro “A”s, though, ended up nicely readable, and I’m that pleased to have figured out the lower case “a”. The current pattern makes for a very small patch, so I added a border that took forever to sew, but it’s so simple and cute that I don’t care.

(Said border wouldn’t have taken so long if I didn’t need to unpick half of it because I can’t count.)

Since I like my lower-case “a”, I decided it needed to become a text patch. This is still a work in progress, as I haven’t yet trimmed the patch or stitched the border, but it definitely fits my lower-case aromantic aesthetic needs: 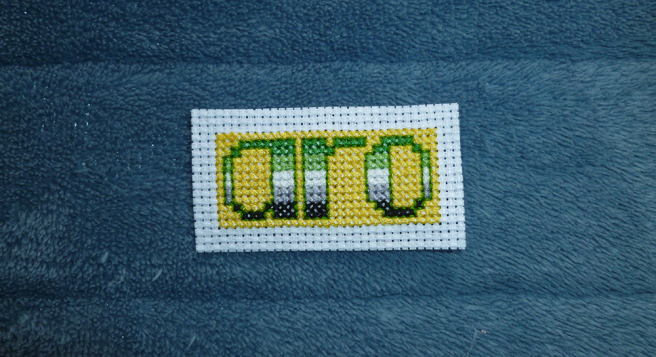 I will add another stitch’s width around (two stitches’ space/blocks between the edge of the design and the edge of the lettering) in the final pattern, but that’s the only change I’ll make to this test piece. Isn’t it cute? I’ve now got a characters with width enough to show the flag’s stripes without reminding me of a digital clock, and that’s a win in my book!

(I will also try harder, in future, to keep from blobbing fabric stiffener onto the top left corner of my patch.)

And because I really like how my allo-aro arrow pattern turned out on my new header, share it here as a transparent image:

Am I going to do a series of these? Absolutely.